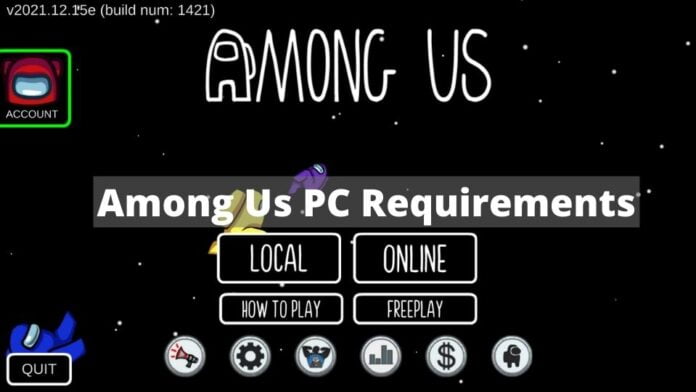 Steamers and gamers are playing among us on the pc which brought many people to play it. Among us become popular in 2020 because of gamers.

Among Us Pc Version Official

Among Us PC official version can be found on steam. As a paid game you will need to pay 2.99$ for this game. Many of us wanted to download the torrent and others among us cracked versions but as an online multiplayer game till now even I can’t found.

Among Us Pc Requirments: Minimum and Recommended

Among us Minimum requirements

Here I will list your steam and my minimum requirements.

Among Us Steam Minimum Requirements (Official)

Among Us Minimum Requirements (At least)

RAM CAPACITY:1GB(You need a minimum 1GB ram to play among us on your pc.But better to be more than 1GB)

Graphics Card: NVIDIA GE Force 510(It is the cheapest graphics card which runs among us.If you want to play without spending much money, then it is better for you)

OS: Windows 7 SP1+( Window 7 can run among us perfectly. Better to be Windows 10 with higher performance.)

If you are a gamer and you need to go to live in among us, then only the minimum requirements will not be enough for you. You need higher requirements for higher performance.

These are the among us pc requirements.

Now, go to your pc setting and check your pc species whether it runs among us or not?

Can I Run Among Us?

Some Details Of Among Us

Among Us is an online multiplayer social game that is developed and published by American game studio InnerSloth and released on June 15, 2018.

This game action takes place in a space-themed setting or spaceship where each multiplayer global players take the role of crewmates(doing minigames or tasks) and imposter(killing the number of crewmates to make it equal to the number of Imposters).

Alternatively Method Of Among Us PC Version

Alternatively, you can play among us pc version free using an android emulator. You can see the related articles below with a video tutorial.

This is the among us pc requirements, I hope you make your doubts clear doubt among us system requirements both minimum and maximum.