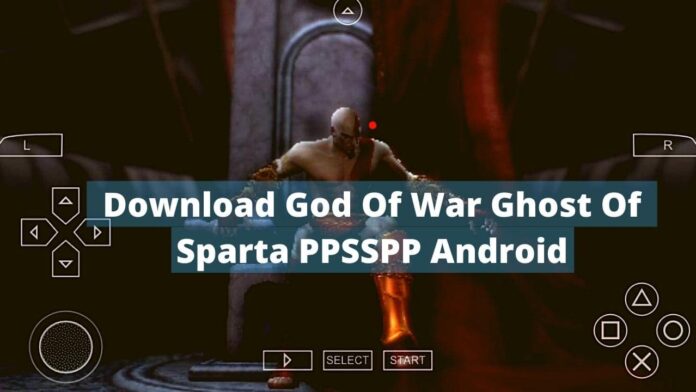 This game was based on old Greek mythology from the Kratos(Warrior You Control) story followed who was a great Spartan warrior who was trapped by the Ares who is the god and Kratos was serving him that get him to kill his family and he was taking to revenge to god.

God of war ghost of Sparta ppsspp android is one of the video game in which Kratos was taking his revenge.

Finally and this game was one of the good compared to God of war: Chains of Olympus. God of war is the best surviving game for me.

Here is the main list of God of War series according to the release date:

Overview of God of War: Ghost of Sparta

This was the sixth series of God of war game. This game is set in ancient Greece with vengeance as its central motif. You have to regulate the Kratos the God of war who is still troubled or plagued by nightmares in which he always sees his family’s death and his daughter fluted.

First of all God of war games became the worst ever but after playing the worst became better and good which has also the god of war ghost of sparta ppsspp/PSP game.

The God of War: Ghost of Sparta is identical to the god of war: Chains of Olympus. Many things are similar. In the ghost of Sparta, the developers have concentrated on combo-based combat and our primary weapon —the Blades of Athena—and also another weapon obtained later in the game.

This features you many quick-time events and defeats harder and harder enemies and bosses when you go far and far or complete the level.

The game was updated better compared to the god of war: Chains of Olympus.

God of war ghost of Sparta wins many awards on consoles like so, ps4,ps2, and others. The console gamer compares the graphics and said that the graphics of this game is better than others. They gave the name to God of war “Best Handheld Game”, “Best PSP Game” and “PSP Game of Show”.

The God of war: Ghost of Sparta game was a third party game but not like Pubg and cod. You can play this game after downloading god of war ghost of Sparta ppsspp android. You have to control the Kratos. You can get any ability when you complete the levels and others. You can get the best and best weapons that make it easy to play with and cut the enemy’s head.

God of war: Ghost of Sparta story is best. The best story or RPG game. if you know the story of God of war: Chains The Olympus you will know this story.

When the nightmares don’t get over from his head, he goes to his own place, then again the nightmares come but in that, his mother was calling to Kratos from the place. So, he starts his journey to find his mother, by killing the enemy he found her mother.

When the mother was founded, she was going to die. But before death she said that his brother is alive in the place he was locked by Thanta, Then he goes to find his brother. But he fails for the first time and goes to his place and he listens to the brother dialogue in his head that spartan should never give up.

Then he finds his soldier giving his weapons. Then he goes to that place, fights with enemies, and finally found the brother, but the brother was angry because he didn’t save him before he was taken by Ares, then they fight with each other, the Kratos lose.

But then the enemy comes and takes his brother again, then the tired Kratos follow her, and save the brother when the enemy falls him out of the hills, then they fight with enemy

Fighting with the enemy get loses Kratos’ brother when that enemy hits him badly. Then the Kratos get angry and kill the enemy, then Athena comes and try to give him the power of God, but he escapes and says that God has to pay and go on another journey to kill God.

The concept of downloading god of war ghost of Sparta ppsspp android game is you have to find mothers, slay enemies, discover brothers, and destroy the main boss.

The graphics of the god of war ghost of sparta ppsspp android is good and the quality is too high that many mobiles don’t support it. The graphics are good, a little bit is there no mistakes as I see. But this is good compared to other games as I think.

The sound of this game is too much better than I think. There are subtitles as well as they talk. You canals turn on/off subtitles as you want.

There are no mistakes in sound as I listen carefully while playing. Killing the enemy with weapons also gets a good sound.

As we think, we shouldn’t have to describe it. Because in ppsspp the controls buttons are the same as ppsspp.The attacking combos and combat have mistakes as I find.

This game will also give you tutorials and also can be off the tutorial. the tutorial makes it easy to play.  Many weapons you can find in this game as you play and their controlling is easy.

The graphics of god of war ghost of sparta ppsspp android is good but the playability in potato mobile is lacking.

The God of war game only supports about 60 fps. If your mobile has low fps the game is lagging highly and bad to play it.

There is no requirement of god of war ghost of sparta ppsspp use this game is not available on PC.

I think all the thing in these games is good. Smooth controls, high graphics, and other features. But I think the developers should add to PC this game.

That would be easier to play by all the gamers. All the things in these games are good. I think this link is the best god of war ghost of Sparta psp iso highly compressed link I found.

I would like to rate the god of war ghost of Sparta ppsspp android game 8.5/10.

You can download  god of war ghost of Sparta ppsspp android on the below link: