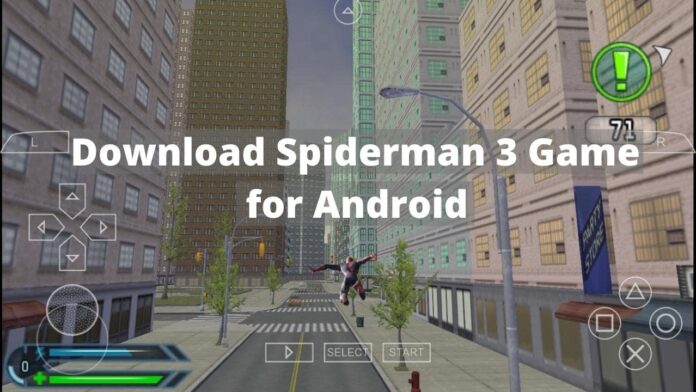 Spider Man is a superhero movie created by Marvel Studios. New Spider man No way home has also been released now. Wanna play the spider man game then learn how you can download the spiderman 3 game for android.

Spiderman movie has shaken up the world by bringing amazing stories and concepts. Spider Man was created by the author StanLee( all marvel superhero book writer). So, after watching spider-man while we were kids we probably wished that we can be spiderman by getting bit by a spider xD. Unfortunately, that’s not possible. But Anything is possible in the virtual world. Therefore, some of the great developers have made a game called spider man 3 from Spider Man 3 movie.

Sadly, it can be only played on Pc or console. But now with the help of an emulator, we can play our favorite spider 3 games on our android. Here, we are gonna tell you how to download spider man 3 on android. without further ado, let’s move on to our topic.

Spider Man 3 is a great console game. Spider Man 3 was the first open world spider man game available on Pc or Android or Console. If you have low end device, I’m not sure if your phone can handle it because this is one of the games that can work in medium or average devices. You may try it, it may be worked.

I especially suggest you guys play this game because it is different than all spiderman games that you have played on your android. You are probably bored from playing Spider man games from playstore. Don’t worry this game will make your mood on.

Before giving you the download link of spider man 3 I would like to give you a short review and my point about the spider man 3 game.

Spider man 3 Game is the best open world and action adventure offline game which was released on May 4 2007 on many consoles and on PlayStation on October 17, 2007, according to Google.

The main developer of Spider Man 3 game is Vicarious Visions, Treyarch, Beenox, and the publisher of this game is Activision. Unfortunately, many People started to hate this game because of some venom features and the unnecessary stories of the game.

This game get a big sale so this game was not available in Xbox and Gameboy advanced and also removed from all the stores on January 4, 2017. It was sad that people didn’t like it then But this game is good for android users.

Spider-man 3 game was expanded from the film spider man 3 of marvel universe and the comic of Spider-man written by Stan Lee. The three villains are added from marvel movies are New Goblin, Sandman, and Venom.

These three guys are the main villains of this game and your main mission is to defeat these 3 villains. Similarly, from comic books, some villains are some in this game.

To play spider man 3 on your android,
you need to download ppsspp emulator. You need a good device to support this game without any lag and glitches.

What is ppsspp emulator?

PPSSPP emulator is some kind of PSP emulator for android. With the help of ppspp gold or ppsspp Emulator, you can play any PSP games you want on your android. Ppspp emulator gives you a similar function as PSP or console. By downloading iso if particular PSP game, you can play it using ppsspp emulator.

Spider Man 3 video game was really good. This game needs to fix some bugs and remove unnecessary features but developers have already lost interest in this game. Let’s describe some of the good features of Spider Man 3:

In other spider man games, while you swing and crash down you die but in spider man 3 you can go down in road safely with no damage taken. In Spider man 3 we can swing anywhere on the map, do everything we want and save the city from monsters.

Here, you can just go and choose a mission whereas in spider man 2, you can only finish the mission and story and can’t do anything.

Also, many games like spider man 2 give you an upgrade function every time you fail whereas spider man 3 will automatically upgrade the unlock function as you get more and more functions. You can also get unlock the new game+option mode when you finish or complete the story. This will give you the feature to play all stories on black spider suits.

Another Fun feature is when you finish the second last story of this game. The final story is the best one. Here, spider man gives you a feature to change the character to goblin or spider man whenever you want. So, defeating venom and sandman will be a little easy for you.

Another Fun features us with some modification and glitch, you can play as a peter parker without any suits on. This will give you some fun to play it. Make sure you do it when you play spider man 3.

There are two villains
they are from
Marvel universe: Sandman, Venom, and New Goblin
Comics: Scorpion, Rhino, and Kingpin

These are all villains that you need to defeat while playing story mode.

The story of Spider Man 3 game is derived from Spider Man 3 Movie. You will also get to defeat some villains of spider man from comics.

First, in the scene, black venom or riot will stick out on peter parker ( you). Then you will get fainted and when you woke up, you will be on the rooftop with the black venom covering your suit.

In the second scene when you or peter parker realize that sandman killed uncle ben, you will fight him kill him as venom takes over peter’s body. But Sandman hardly survived from spider man.

After that, you will go into the building but suddenly a big bell rings and the venom taking over you will start to suffer. So, that venom will go out from your body and stick out on the cameraman which was just below you. So, he will become venom, then cooperate with sandman in order to kill the spider man or you. So, They Kidnapped Mary Jane in order to come there to kill you.

Then you go to your best friend harry house. Spiderman asks for his help and apologized to harry as he killed his father because of his father was possessed by a goblin. Then spider man will go to fight Sandman and Venom. Also, your friend harry comes in the middle of a battle which gives you the feature to change on the green goblin and spider man. Venom will die and sandman will go away. your best friend will die protecting you. So this is the story of Spider Man 3.

The graphic of SpiderMan 3 game is pretty good even it’s an old game. Spider man 3 has a good quality for old gamers. Some of the gamers might not like it but the game matters, not graphics. There are some mistakes in a suit but everything is good. A very good new york map, good swinging features, and stunts, etc
The villains, characters, and spider man suit is made pretty good so I don’t have anything to say here as you are getting to play console game on Pc.

I like the control of spider man 3 game. You will get to do all combos while using ppsspp emulator. The combos are also good with some web functions and wall sticking functions. In spider man 3, many new skills are combos were added. The best thing is the fighting style is similar to the spider man 3 from the movie.

The web function is also pretty good. You need to click L button to swing and it’s not too hard. If you swing, again and again, you will get used to it.

The sound quality and music features of spider man 3 is also good. The sound will give you some realistic and energetic vibes while fighting. It gives you and background sound too. While playing the story, it gives you some seriousness and fun.

In the normal device, to load this game you will get 30 to 40 fps which is pretty good to play it but in some mobile, you can get 60 fps. So, you can play spiderman 3 games on high fps on the ppsspp emulator.

I am showing you the minimum requirements of you at playing in your pc.

How To Install Spider Man 3 game after downloading?

After downloading the spiderman 3 game iso file then, here are some steps you need to follow if you don’t know
Step 1: Download App called “ZaArchiver” from PlayStore
Step 2: Open ZaArchiver
Step 3: Go to download or go where you have saved the file
Step 4: Hold the download file( At the end of the end, there needs to be a zip or you downloaded the wrong file). Then Click Extract
Step 5: Extract The file in download( The extracted file name should have Iso in end)
Step 6: Open Ppspp
Step 7: Go to a place where you extracted the file ( you will get a big image or logo of spider man 3)
Step 8: Click that icon and Play Spider Man 3 with the help of ppsspp emulator.

The story Of Spider Man 3 was good. There were some bad things in game to like venom dying in silly style was pretty bad. Another thing is venom animation is silly as well as some silly sound which makes me angry to play this game.

There is a lot of websites that claim that they are giving spider man 3 video game download for android but the reality is few are only working.

I would like to rate this game 8.5/10. I hope you enjoy my game review as well as the link of iso file for ppsspp to download spiderman 3 game for android.

How to turn on quick chat in among us ?